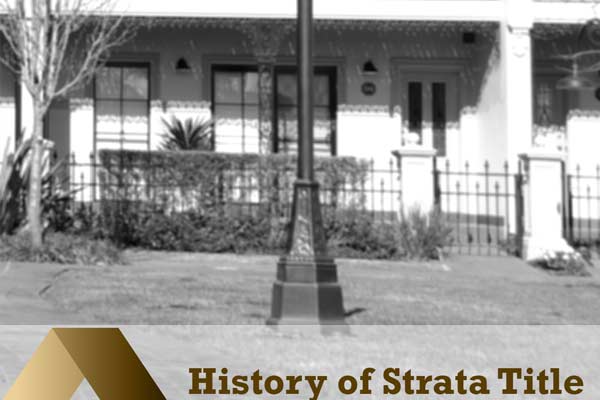 While strata-living is so ubiquitous today, it’s hard to imagine that the concept is a relatively new phenomenon that was developed in New South Wales.

According to Strata Community Australia there are now more than 270,000 strata schemes in Australia that cover in excess of two million individual lots. Here in Sydney, strata titled properties account for more than half of all residential sales and leases.

Historically, communal living arrangements usually fell under company title. A prospective buyer would purchase shares in the company that then entitled them to inhabit a specified apartment. The impediment, however, was that the purchaser didn’t receive independent ownership of the lot and as such financial institutions were hesitant to grant a loan under this scenario. 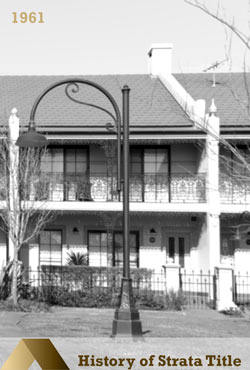 On July 1 1961 the Conveyancing (Strata Titles) Act came into force. The New South Wales government had officially formulated a framework for strata titled properties that would be replicated around the world in such countries as Canada, Dubai, Singapore, New Zealand, South Africa and Malaysia to name only a few.

Further legislative refinement in 1973 led to the passing of the NSW Strata Titles Act and Regulations.

The structure outlined in the legislation allowed buyers to own outright a property within a communal environment – whereby giving the banks the much needed security for the loan.

Interestingly, the first strata-titled building in the world was located in Burwood. The strata plan for the 18 apartments was approved by Burwood Council on July 28 1961.

Around Australia, other state and territory governments followed the example set by New South Wales by passing their own strata legislation.

Since these early days the legal framework has been revised many times by successive state governments to meet the needs of the ever changing landscape of community living. In New South Wales today, the principle legislation governing strata buildings is the Strata Schemes Management Act 2015.

And while the purpose for strata properties has expanded beyond residential to include commercial, retail, retirement villages and resorts the core principle remains the same – individual ownership of part of a scheme combined with a shared ownership of common areas that are managed by an Owners Corporation.

As strata schemes became more complex, the need for dedicated strata managers arose. It is companies such as Netstrata that meet the need for informed and expert service. We’ve been around for more than 20 years and our team identified very early that Owners Corporations appreciated personalised attention. That’s why we keep the ratio of manager to scheme very low.

If you have any questions around the history of strata living, contact your Strata Manager at Netstrata.