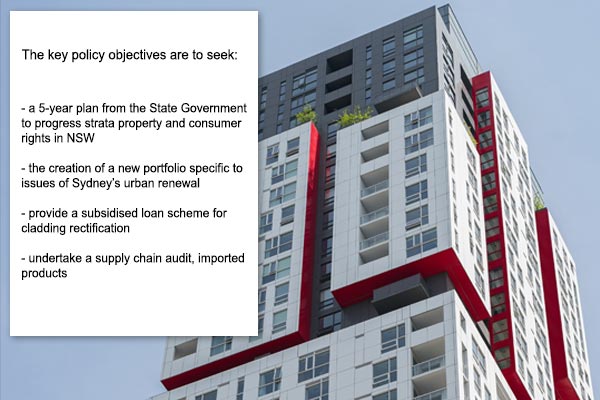 “SCA (NSW) has written to the new Minister congratulating him on his new portfolio and outlining who we are and what we represent. We have sought a meeting with him as soon as possible to detail our five-year vision for the NSW strata sector,” Chris Duggan wrote in an email notifying the SCA (NSW) database.

Chris Duggan stressed that he hoped the NSW Government will continue to improve the lifestyle for the two million NSW strata residents in this term of Government, and highlighted the key policy areas of flammable cladding, building defects, imported building materials and urban regeneration.

The SCA (NSW) would like to see industry working groups being formed and education initiatives established over the coming months to discuss these issues.

A similar letter has also been sent to all NSW MPs who represent a significant number of constituents living in strata scheme apartments and townhouses. The SCA (NSW) is keen to continue enjoying a close and collaborative relationship as part of a multi-faceted engagement strategy – meetings have been requested with these MPs as well.

There are four primary policy objectives raised by Chris Duggan in these letters.

The first policy discussion point is the request for the State Government to create a 5-year plan to progress strata property and consumer rights. The letter documents that recent rapid growth has complicated quality control processes and that there needs to be a specific focus on ensuring development doesn’t come at a cost for those involved.

Secondly, the SCA (NSW) would like to see a new portfolio created dedicated to Sydney’s urban renewal. This portfolio would enforce major design, liveability and quality mandates.

Also listed in the letter is the expectation that a subsidised $100 million loan scheme would be established for cladding rectification. This would assist affected buildings cover the rectification costs.

Finally, the SCA (NSW) would like the NSW Government to lobby federal parliaments into introducing more stringent import controls as too many defective products are entering Australia.

The previous Minister for Better Regulation and Innovation, Matt Kean now represents the Energy and Environment Ministry. Having gained significant experience on strata living over the past two years, it’s expected that the SCA (NSW) will continue to receive support from Matt Kean.

Kevin Anderson’s appointment is a promotion for the Tamworth MP – this is his first cabinet position since being elected in 2011. For the past two years he was the Parliamentary Secretary for Regional Roads, Maritime and Transport, and has been a member on various parliamentary committees.

If you have any questions about the SCA (NSW), contact your Strata Manager at Netstrata.