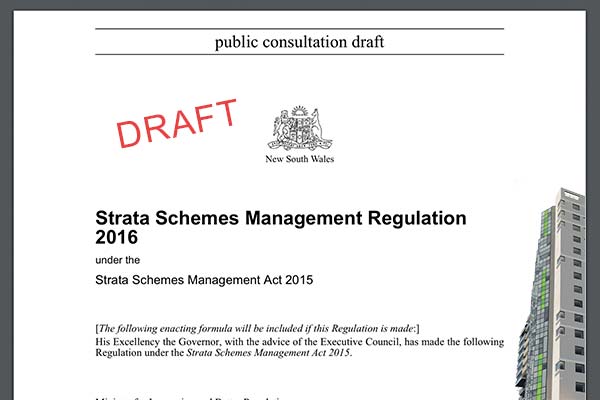 Last year the NSW state government passed the most significant reforms to strata living since the Strata Titles Act was passed in 1973. As part of this modernisation process, there were over 90 changes to the current laws.

The Development Regulations outlines the requirements for the preparation of strata plans. According to the Fair Trading Department, “The draft Regulation provides necessary detail to support the new collective sale and renewal process… The Regulation includes:

On the other hand, the Management Regulation proposals are aimed at preventing financial mismanagement and easy access to financial records for owners and prospective buyers.

Also included in the draft proposals is a process for mandatory Fair Trading mediation so that disputes can be settled sooner. Another proposal includes the allowance of different types of voting processes such as secret ballots, remote voting, pre-meeting voting and importantly electronic voting to encourage an inclusive strata environment.

Building bonds, which were first introduced as part of the Act last year for new strata properties, are also discussed. Construction defects need to be identified, documented and fixed using a bond that’s set aside by the developer. The new proposal covers how these bonds will function and when the government could intervene to review the decisions taken.

The government is inviting interested parties to have their say on these draft proposals. The Department of Fair Trading website details the methods by which you can lodge a written submission either via email or through the post.

If you have any questions regarding the latest proposals to strata living, contact your Strata Manager at Netstrata.